We come to the final part of this journey, although we are still 5,200 km from home, we only had in mind 2 more bucket list “must do’s” to tick off.

So while there is a lot of distance to cover, once within a 1500km range from home, “Smelling The Roses” tends to become less important. 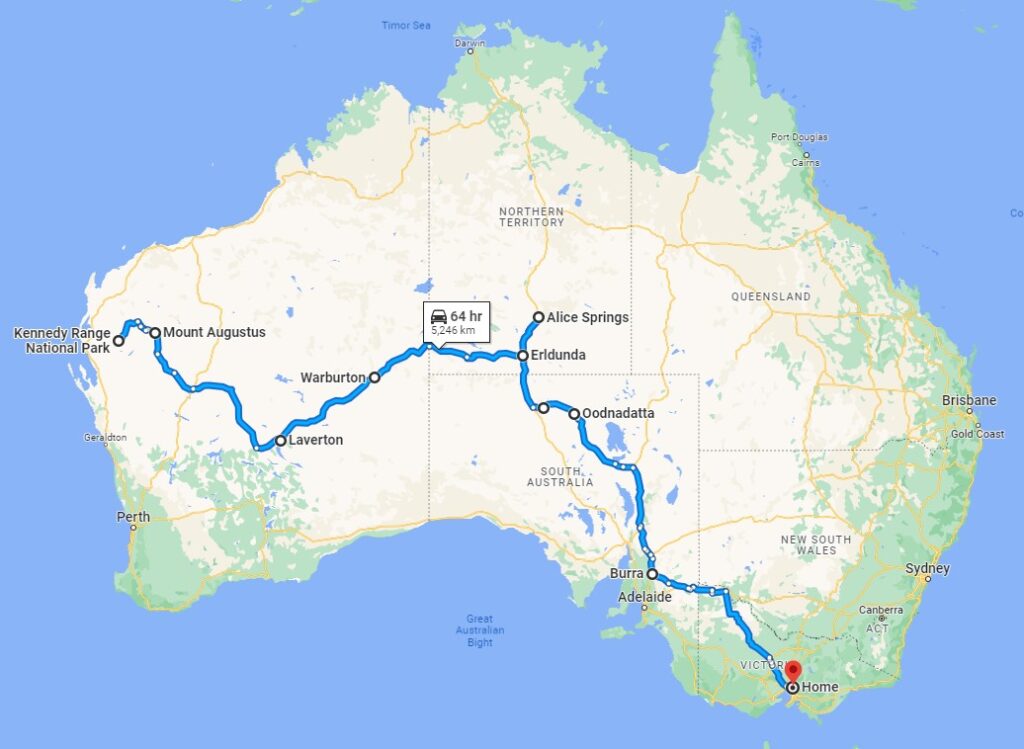 On the 20 June we set off from Kennedy Ranges NP, and headed for Mount Augustus. Mount Augustus, while not as unique in it’s appearance as Uluru, is the largest monolith in the world.  It does not have the visual impact of Uluru (Ayers Rock) but it is impressive, none the  less.

Apparently a number of people have died climbing to the summit, mainly on very hot days. It is advised to allow 8 to 12 hours to complete the walk. Something that we were not prepared or equipped to do but there is plenty of exploring that can still be done. 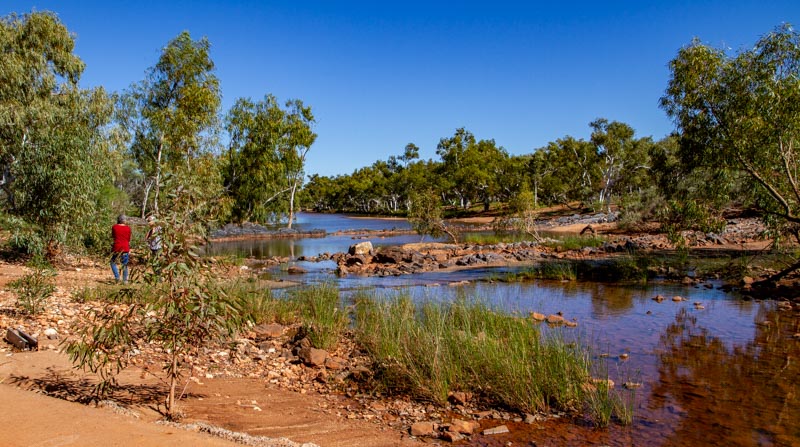 Gifford Creek – Lunch spot on the way to Mount Augustus 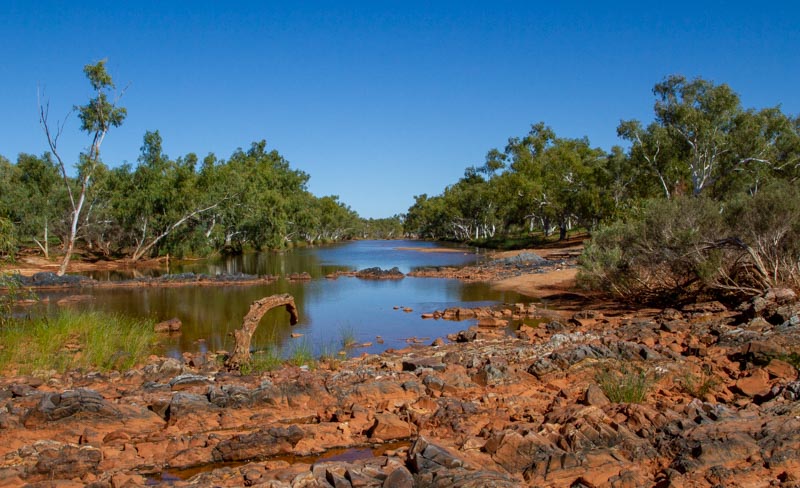 Our first view of Mount Augustus 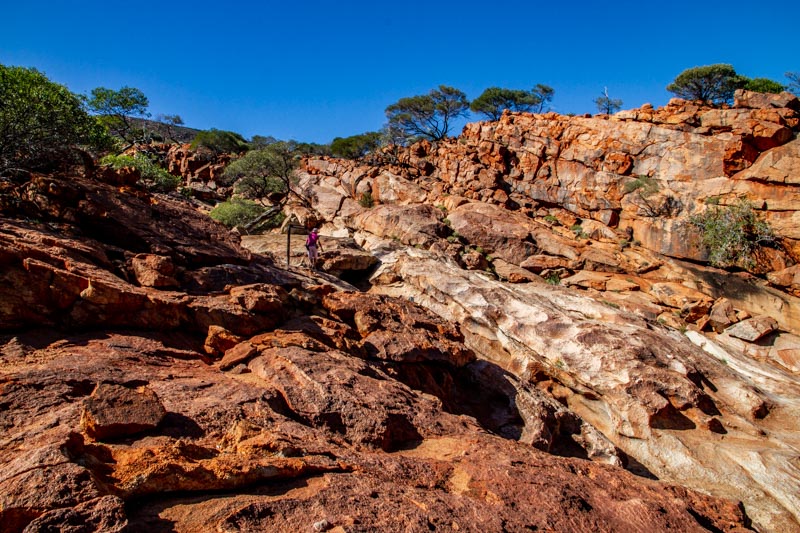 Searching for the hidden petroglyphs 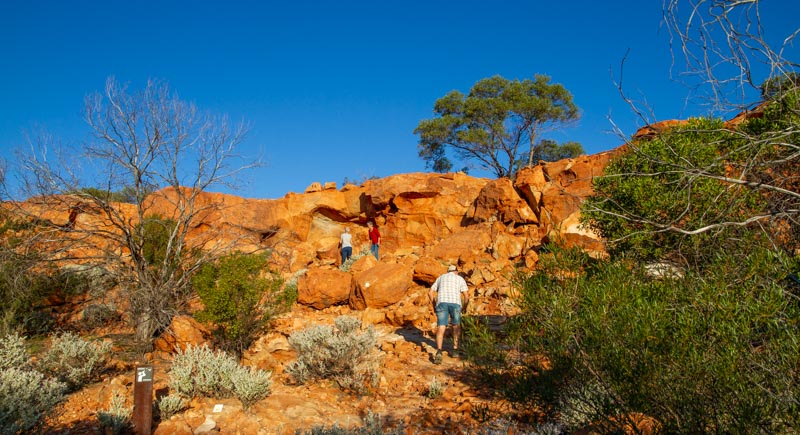 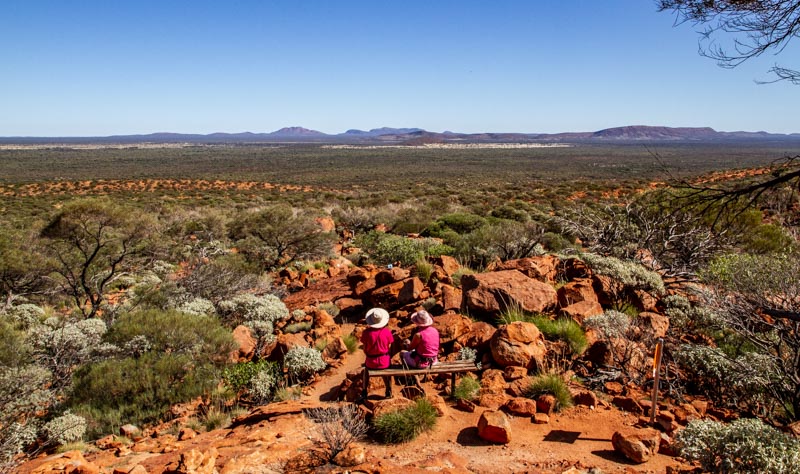 We completed the first stage of the summit track 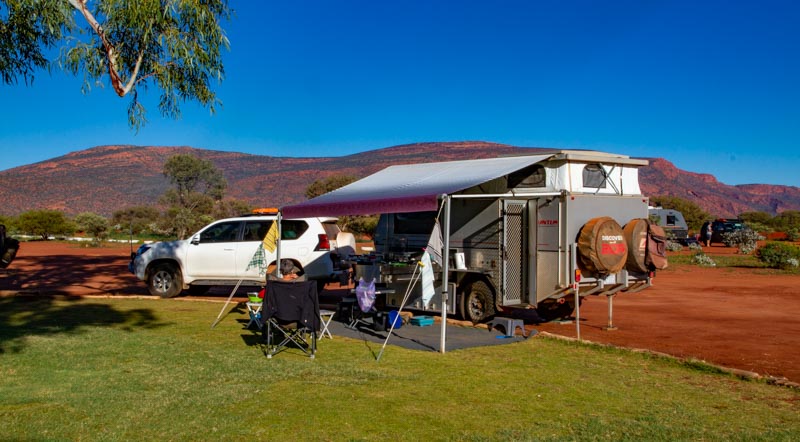 Our camp with mount Augustus in the background. Fabulous camp ground, excellent hosts.

On the 22nd June we set of around 10 am and headed for Meekatharra. While Meekatharra does not get a good wrap from people in the know (fellow travellers), it was convenient for us both in distance and size for doing some shopping for needed supplies. We were luckily able to get  a couple of camp spots in the very ordinary caravan park which had a number of issues. Bit in it’s favour it had the services of any excellent chef who did a fabulous job of preparing take away evening meals. I think we would probably not make Meekatharra a destination if we were travelling this way again. 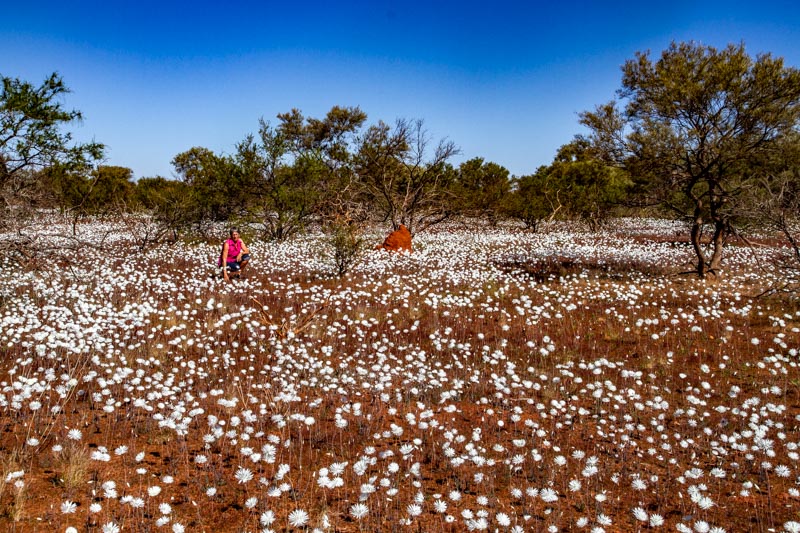 Chris getting amongst the wildflowers on our way to Meekatharra. 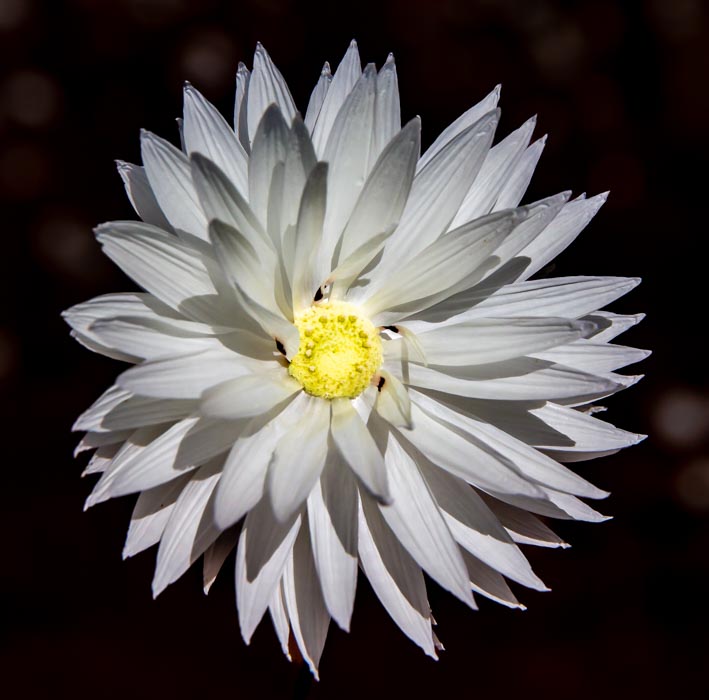 The  following day we travelled to the historic town of Sandstone. In contrast with Meekathara, the camp ground was excellent. After arriving and setting up our camps we had time to drive the Heritage Trail.

Sandstone his a very colourful history starting in around 1894 when a major gold discovery was made. It has wide streets with restored historic buildings and a fabulous Heritage Museum. 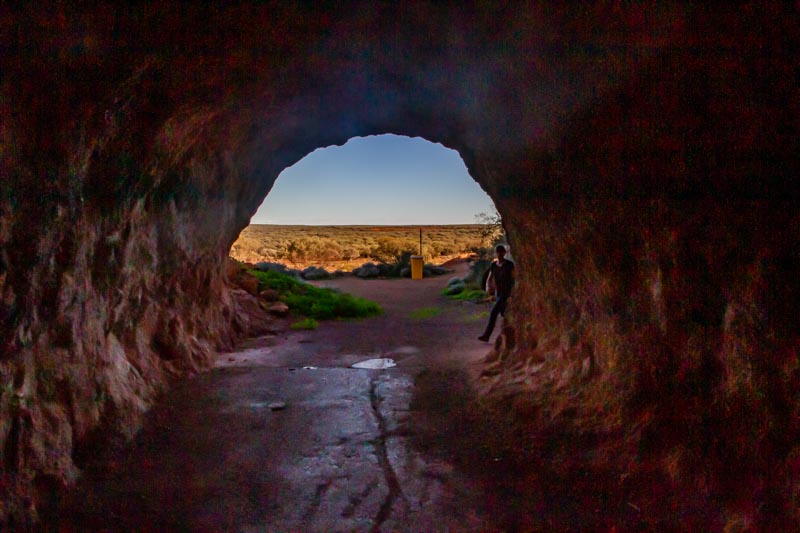 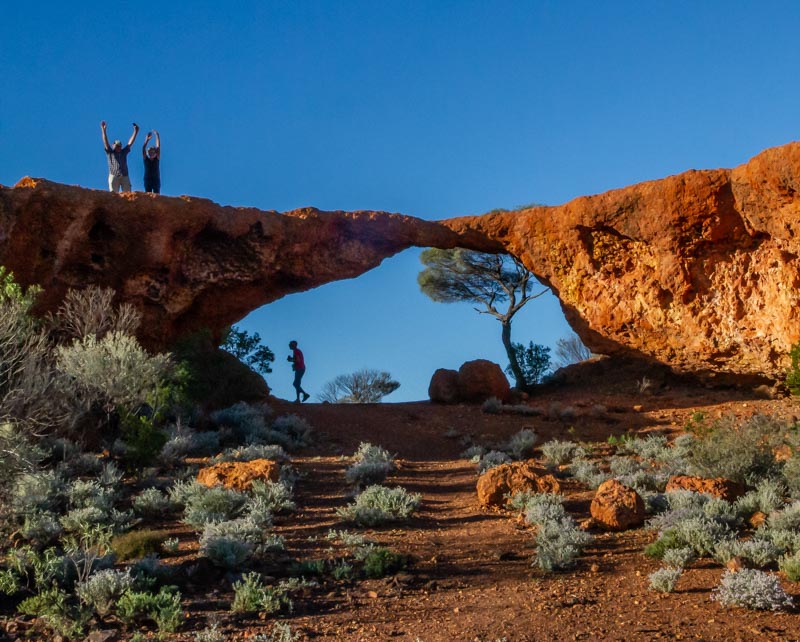 Some in our party had knowledge (not me I might add) of the largest outdoor art gallery in Australia at Lake Ballard near the gold rush town of Menzies. We arrived at Lake Ballard campground at around 5 pm and set up camp. We decided to wait until the following morning (for the early morning light) to venture out onto the lake. To walk the entire gallery of art would take quite a number of hours. It is huge! We decided to limit our walk to a couple of hours which we figured was enough to satisfy our curiosity. And besides, while the statues were impressive with subtle detail, we got the idea without doing a 4 hour walk or more.

After our morning walk on the lake we broke camp and drove the short distance into Menzies. Harold and Di were keen to get to Kalgoorlie and as we had been there before we decided to bush camp at Goongarie Station about 56 km South of Menzies and is in the throws of becoming a National Park except there is apparently some difficulty in determining who the traditional owners are of the land. There are two indigenous groups claiming ownership. So Chris and I had 3 days (4 nights) in a great camp spot to chill out and relax. Way to go! 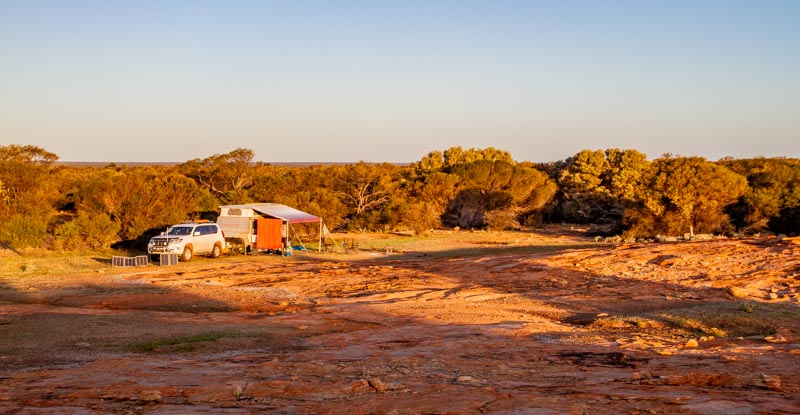 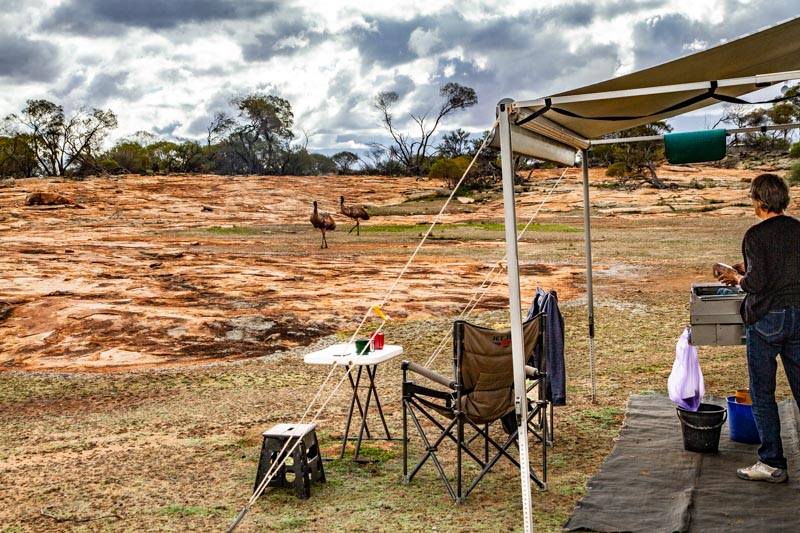 Visitors to our camp. 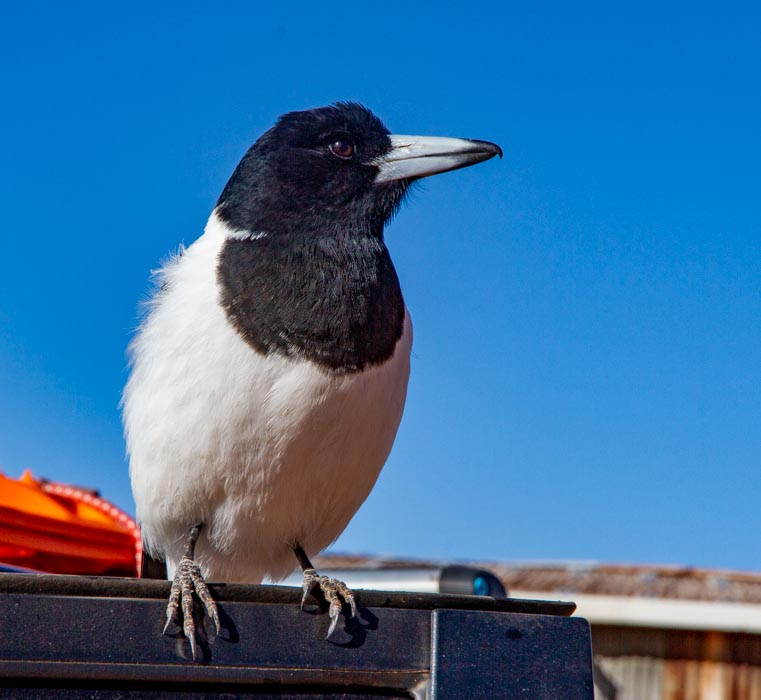 Butcher bird looking for some hand-outs.

On the 29th Chris and I set off and headed for Menzies to replenish water and hopefully get a coffee before heading to Laverton to meet Harold and Di who were now headed in the same direction. The plan was to get our permits for driving the Great Central Road organised at the Tourist Information centre in Laverton. We had had good advice from our mates Phil and July (who had taken the same path home) that it was the best and easiest way to apply for the permits without doing it online with phone or tablet. The young lady in the information office was fabulous.

Chris and I took the alternate route to Laverton to check out the Niagara Dam Nature Reserve  A significant dam built in the late 1800’s and never used. 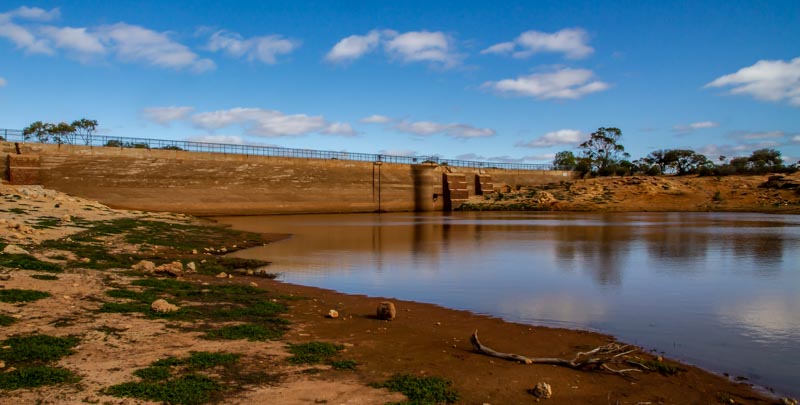 Harold and Di arrived in Laverton about 15 minutes after us, so we then went and organized our permit applications.

That night I had rather eventful experience in the caravan park, with me getting up to take a pee and disturbing a bloke who had scaled the 8ft high fence to pilfer stuff in Harold and Di’s camp. Subsequent to us reporting the incident to the Camp Ground Manager the next morning, we had a visit from the local police.

After chatting to the police we headed up to the visitors centre, had some lunch, collected our permits and headed off across the Great Central, otherwise promoted as “The Outback Way – Australia’s Longest short cut”.

In travelling the Great Central (aka The Outback Way) we drove through a number of indigenous communities (hence the requirement for permits to travel along the road as it is mostly Aboriginal land). Supplies and fuel are available in each of these communities, provided of course that you do not arrive out of hours on the weekend. $30 opening fee per vehicle is required.

You are not permitted to take photos in any of the communities but especially in Warburton. We had been warned that we should not plan to camp at Warburton but reading the “Outback Way” brochures promoting Aboriginal art in the community, left us with the impression all would be good. And in the end it was all good however:

Behind the roadhouse there was a very large compound with huts and other accommodation. When we indicated to the roadhouse staff that we wanted to camp, they were a little surprised but never the less checked us in.

The compound was surrounded by a 12 ft high fence with razor wire around the top, and a substantial padlocked gate. We were advised by a visiting electrician that it was quiet at the moment because many from the community were away at a funeral. When checking in we were given the following. 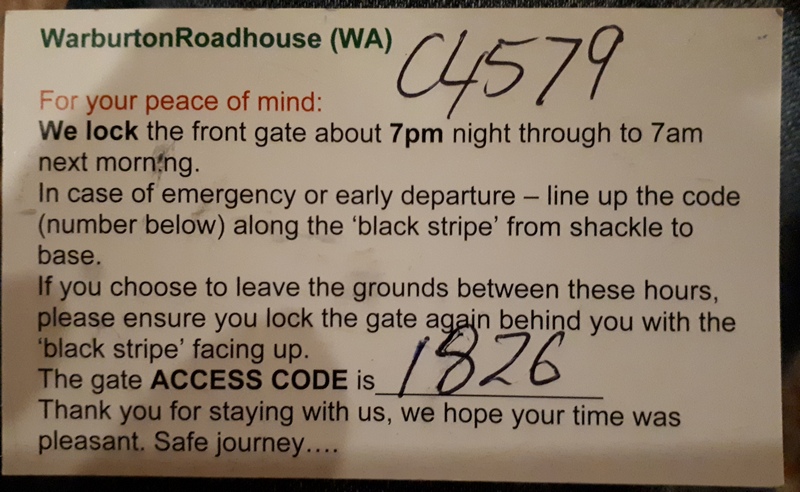 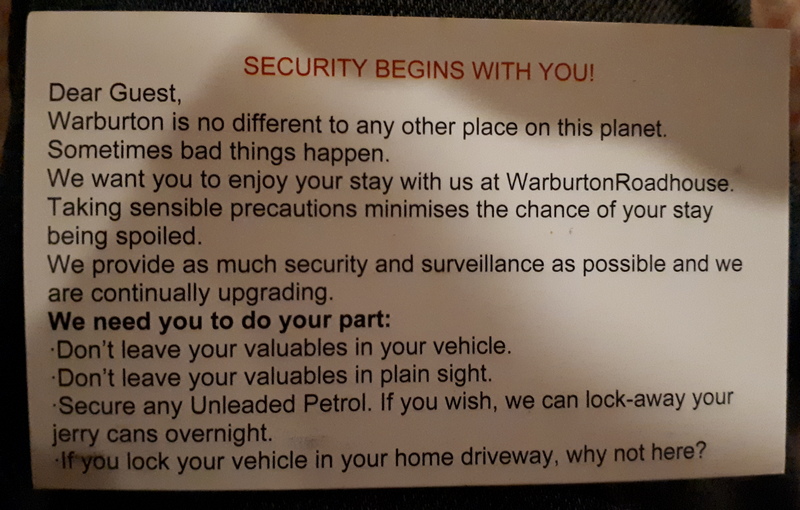 Since the printing of the card above things have changed a little and the gate is now locked 24/7.

Interestingly, when we called into Warakurna (The next fuel stop after Warburton) we found that there was camping available without any security and they do not have any problems it seems. And in contrast to Warburton, the placed was very clean and tidy.

Our second to last camp on The Great Central was just east of Warakurna overlooking the fabulous Peterman Ranges. (Slideshow above)

Our final Camp was in a borrow pit where we carefully set up camp to ensure that we could not be sighted from the road.

We had been having serious problems with the batteries in the camper for some time and it all came to a head during the last 2 nights camped on the Great Central. So Chris and I headed straight for Alice to get our batteries replaced, after all they were 6 years old, and Harold and Di would do the Kata Tjuta, Uluru tourist thing. Chris and I had had a number of previous visits and in any case, I had been the NT manager of the quarry and concrete company that supplied all of the concrete to Yalara and subsequently had visited on a number of occasions.

The irony of the battery failure was that I had bought the current batteries in Alice Springs precisely 6 year prior from the same battery supplier.

New batteries installed in the camper and we’re ready to head off with camper hitched and ready to go, only to find that I had a seriously flat tyre on the rear of the car. Bugger! So back into Alice (we were camped about 20 kms out), I had determined that there was enough air in the tyre to make it to the tyre repairer even with the camper hitched up.

At last on the road;

We agreed with Harold and Di that we would meet at Marla around 450 km south of Alice Springs on the Stuart Hwy, then head down the Oodnadatta track to Marree and then head home through Farina, Carrieton, Morgan, Renmark  and Mildura. While we weren’t going to break any speed record, we were not intending to meander to any great extent.

After Marla we camped on the Peake Creek and then the next night in the fabulous camp ground at Coward Springs. From Coward Springs we refuelled at Marree, then drove onto the old mining town of Farina to camp. Farina is being restored by a bunch of very enthusiastic volunteers.

Farina Has an excellent Camp Ground with an honesty box for fees. It is always on our list of placed to call into when we are in the area. Of particular attraction is the War Memorial at sunset and the underground bakery and plenty of other culinary delights.

Now we were definitely on our way home and while it was still about 1,357 Km to go, this is pretty much where the story of our 2022 Adventure finishes.

From Farina the following day we took the backroad to Beltana after refuelling at Leigh Creek, then on to Carrieton for 1 night, one of our favourite spots for a Pub meal. Another night in Morgan at another fabulous camp ground if you go “unpowered” (Unpowered you are on the river).

We then needed to drop into Renmark to chase up and confirm our river boat booking for November before camping at Mildura for 2 nights. Because Harold and Di have their camper in storage when they are home, they have difficulty cleaning and maintaining, so wished to take a couple of days in Mildura before heading home to give them time to scrub off the desert grime etc.

Then 1 final night in Bendigo so that we could arrive home in the early afternoon.

Arrived home at 2:40 pm on July the 15th. Pretty much precisely 4 months on the road having left Melbourne on the 16th March.